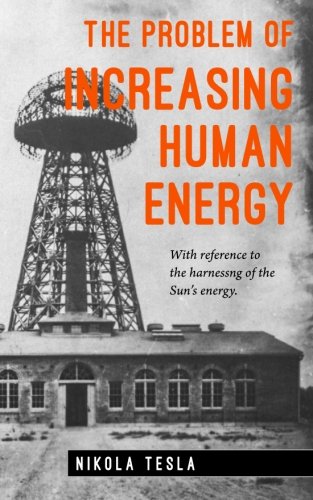 The Problem of Increasing Human Energy

NIKOLA TESLA was one of the most influential inventors of the last century. Eventually holding over 700 patents, Tesla worked in a number of fields, including electricity, robotics, radar, and the wireless transmission of energy. His discoveries laid the groundwork for many of the twentieth century’s greatest technological advances. This book explains Tesla’s thoughts on humanity’s relationship with the universe, and also his explanation and scientific extrapolation on the technological advancements embodied in his work. This text, first published in Century Illustrated Magazine in June 1900, is yet another example of the genius of Nikola Tesla. CHAPTERS Introduction. – The onward movement of humanity – The energy of the movement – The three ways of increasing human energy CH 1 – The first problem: how to increase human mass – The burning of atmospheric nitrogen CH 2 – The second problem: how to reduce the force retarding the human mass – The art of telautomatics Ch 3 – The third problem: how to increase the force accelerating the human mass – The harnessing of the Sun’s energy CH 4 – The source of human energy – The three ways of drawing energy from the Sun CH 5 – Great possibilities offered by iron for increasing human performance – Enormous waste in iron manufacture CH 6 – Economical production of iron by a new process CH 7 – The coming of age of aluminium – The doom of the copper industry – The great civilizing potency of the new metal CH 8 – Efforts toward obtaining more energy from coal – Electric transmission – The gas engine – The cold-coal battery CH 9 – Energy from the medium – The windmill and the solar engine – Motive power from terrestrial heat – Electricity from natural sources CH 10 – A departure from known methods – The possibility of a ‘self-acting’ engine or machine – The ideal way of obtaining motive power CH 11 – First efforts to produce the self-acting engine – The mechanical oscillator – The work of Dewar and Linde – Liquid air CH 12 – Discovery of unexpected properties of the atmosphere – Strange experiments – Transmission of electrical energy through one wire without return – Transmission through the Earth without any wire CH 13 – Wireless telegraphy – The secret of tuning – Errors in the Hertzian investigations – A receiver of wonderful sensitivity CH 14 – Development of a new principle – The electrical oscillator – Production of immense electrical movements – The Earth responds to man – Interplanetary communication now probable CH 15 – Transmission of electrical energy to any distance without wires now possible – The best means of increasing the force accelerating the human mass From the Introduction: Of all the endless variety of phenomena which nature presents to our senses, there is none that fills our minds with greater wonder than that inconceivably complex movement which we designate as human life. Its mysterious origin is veiled in the forever impenetrable mist of the past, its character is rendered incomprehensible by its infinite intricacy, and its destination is hidden in the unfathomable depths of the future. From where does it come? What is it? Where is it going? are the great questions which the sages of all times have endeavored to answer. Modern science says that the sun is the past, the earth is the present, the moon is the future; in other words, from an incandescent mass we originated, and into a frozen mass we shall eventually turn. And yet there is another way...
Show More
Reviews

The Problem of Increasing Human Energy

Disclaimer: The price shown above includes all applicable taxes and fees. The information provided above is for reference purposes only. Products may go out of stock and delivery estimates may change at any time. Desertcart does not validate any claims made in the product descriptions above. For additional information, please contact the manufacturer or desertcart customer service. While desertcart makes reasonable efforts to only show products available in your country, some items may be cancelled if they are prohibited for import in Hungary. For more details, please visit our Support Page.